There are so many stories from last Sunday it’s hard to know where to start. If I go chronologically, I’ll begin with the vote at St. Francis. St. Francis was voting whether or not to accept the invitation of the Sierra Pacific Synod to restore their relationship with the ELCA.

Sunday’s vote didn’t mean the congregation was rejoining the ELCA, rather it meant the process would begin. With so much news about congregations leaving the ELCA, it may have caught a few people’s eyes that this one was talking about coming back.

Why did they leave? Well, St. Francis is where it all began for Extraordinary Lutheran Ministries–St. Francis and First United, both of San Francisco. These two congregations issued calls to openly gay and lesbian pastors in 1990, beginning a chain of events that led the ELCA to where it is today. It was the birth of the Extraordinary Lutheran Ministries movement: congregations willing to extend calls to gay and lesbian pastors that the ELCA refused to recognize, and LGBT pastors who gave up official recognition from the ELCA in order to live as openly LGBT people. The congregations were removed from the list of ELCA congregations in 1995 as a result of these actions.

Earlier this year, Bp. Mark W. Holmerud and the Sierra Pacific Synod passed a synod resolution inviting the two congregations to rejoin the ELCA. The vote on Sunday was about accepting the invitation.

After some lively debate, the question was called and with a sense of joy and anticipation in the room, the votes were cast. The result was 69-1, and it was announced to resounding applause.

In the photo below, former pastor Rev. Jim DeLange (pastor at the time of the calls) and St. Francis member Deb Cote (on the call committee for Ruth Frost and Phyllis Zillhart and crucifer for their ordination), react to the vote with smiles and applause. And this next part of the journey begins… 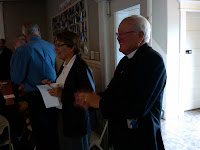 One Reply to “St. Francis Begins Process to Rejoin the ELCA”