“Then Saul’s anger was kindled against Jonathan. He said to him, “You son of a perverse, rebellious woman! Do I not know that you have chosen the son of Jesse to your own shame, and to the shame of your mother’s nakedness?” 1 Samuel 20:30 (NRSV)

For so long, too many in the LGBTQ+ community have been told we are “outside the Kin-dom of God” because of who we are or how we love. Chapter and verse have been abused in the Bible as “proof” we are not God’s children. As valuable as it is to defend against such Clobber Passages, it is just as faithfully essential to seek the queer in the Bible. The more we lean into the Bible’s queerness, the more we can claim it! This passage, 1 Samuel 20:30, is one that I am claiming today because when seen through my queer lens, it shares an all too familiar story about growing up gay in a straight world.

In 1 Samuel 20:30, we find Saul, in a burst of murderous rage, confronting his son Jonathan who has just lied to him—his own father—to protect David. In addition to blaming Jonathan’s mother, Saul confesses to knowing exactly what Jonathan and David have been up to. A couple of chapters previous, in 1 Samuel 18:1, Jonathan declared David to be his soulmate; just before Saul’s outburst itself, Jonathan and David had pledged their love for each other in 1 Samuel 20:17. Jonathan chooses his soulmate over his father, and Saul refuses to accept it, so what did he do? He did what so many fathers who suffer toxic masculinity do, which is to blame the mother… “You son of a perverse, rebellious woman!”

So, why am I sharing this story with you? It’s because I see my queer self in the scripture. Growing up gay in a different time and in a different place, it was painful not to be straight. It was not okay to be gay. And, whenever the whispers started, they invariably turned to “mama’s boy”, “sissy”, “too close to his mother”, or “his mother must be domineering.” Someone must be at fault for bringing the queer into this world, and it certainly could not have been the men. For my generation, I believe this to be an all too familiar story, and sadly it still happens today. Rather than loving the child, the focus is on who is to blame.

We can see hope in stories like Jonathan and Saul because the Holy Spirit leads us to the queerness in the Bible, and that queerness is liberating. It’s what the Holy Spirit does when it gives us our faith. When we and our LGBTQ+ siblings are told we are “outside the Kin-dom of God” we know it’s not true because we can find ourselves right there alongside all of God’s creation. Best part is, having been led by the Holy Spirit to see ourselves in the Bible, we will continue to find the holy queer again and again. And, for that we can say: Thanks be to God! 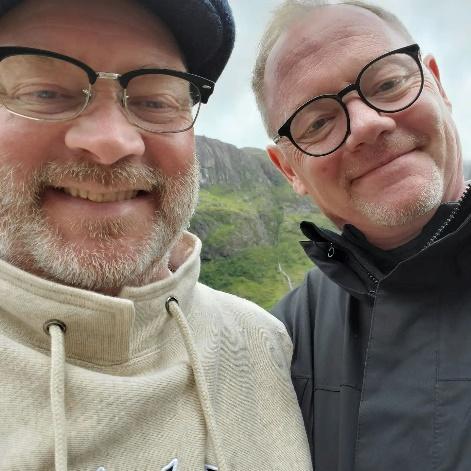 Mo Goff (he/him) is a second-year MDiv student at United Lutheran Seminary pursuing ordination in Word and Sacrament under the care of the Delaware-Maryland Synod. Before seminary, he worked in politics and public policy in Washington, DC. He and his husband, Rev. Shawn Brandon, reside outside of Annapolis, MD, with their dog, Lola, and cat, Eve.