From ELM: October is LGBTQIA+ History Month and Reformation Month! October is also the final month of ELM’s #Proclaim300 campaign, celebrating reaching 300 members of Proclaim, ELM’s professional community for publicly identified LGBTQIA+ ministers & candidates. For the next 4 weeks, ELM will run a blog series on “Radical Reformation”: ministries led by Proclaim members doing prophetic work that is out of the ordinary! Read on, from Pr. Kari Lipke: 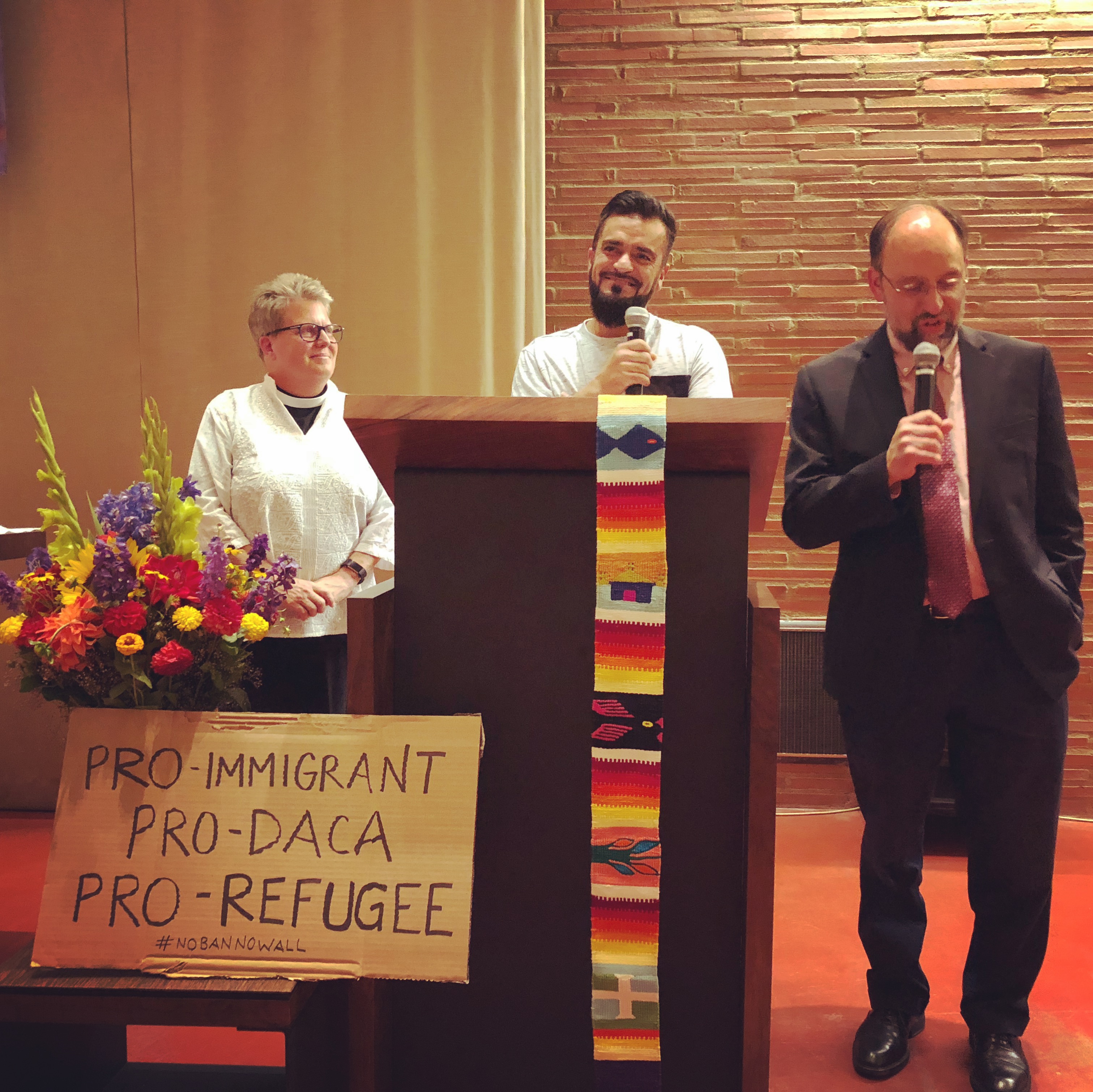 Right before worship on Palm Sunday 2017, Gethsemane Lutheran in Seattle, WA voted to become a Sanctuary Congregation. For us, it was a necessary response to the months of anti-immigrant rhetoric and actions kindled by the administration in Washington, DC and burning in communities across the nation. Liturgically, Jesus’ humble entry into Jerusalem on a donkey amidst crowds yearning for a different way to be community together—a way opposed to the xenophobic and dominating empire embodied by Herod and his flashy entourage—made sense as a moment for us to also oppose the xenophobic powers of our time and put our yearning for a more inclusive, respectful, and loving community into practice once again.

There are many ways to participate in the New Sanctuary Movement, but our congregation decided that our way would be to host in our building an individual or family under threat of deportation. Places of worship, you see, are on Immigration and Customs Enforcement’s very short list of “sensitive locations” and so ICE (Immigration and Customs Enforcement) typically leaves undocumented immigrants alone when they take refuge within a church, synagogue, or mosque.

To prepare for our eventual guest or guests, Gethsemane worked with the Church Council of Greater Seattle, a nearly 100-year-old now-interfaith organization that connects faith communities in our area around our common work for justice. As part of their “For Such a Time as This” campaign, the CCGS offered orientations about the New Sanctuary Movement, organizing meetings to connect with other like-minded faith communities in our neighborhoods, and training sessions such as Cultural Humility, Know Your Rights, to Rapid Response in the event of a local immigration raid.

In June of 2018, as the nation roiled in anger over children in cages and family separation, Gethsemane’s Pastor Engquist received a phone call from partners at the CCGS: Jose Robles, a married father of three in Lakewood, WA, had been denied a U Visa Certification by the Lakewood Police Department and City Attorney. Without that certification he could not apply for a U Visa—a special visa for victims of violent crimes who cooperate with local law enforcement. Jose was scheduled to self-deport by boarding an airplane for Mexico on a Thursday morning. Instead, he came to Gethsemane Lutheran Church.

Jose is the 45th person to take Sanctuary in the United States in our current climate. You can Google his name + Gethsemane if you want to learn more from the media. But what I want people in the ELM community to know is this: As a queer person of faith, I’m heartened by the outpouring of love for Jose and his family shown by people in many Seattle-area faith communities. It resonates for me because I remember quite viscerally what it felt like to find people of faith willing to stick up for me, embrace me, and work for my equality throughout the 1990’s and 2000’s. Those people were hope, embodied, for me. And now we, together, are for Jose, and for the many who likewise live under the threat of deportation.

Even though it’s really hard to witness the unnecessary suffering that inhumane immigration policies and enforcement inflict on people, I can’t help but to also be inspired by our collective insistence as a Sanctuary Network that we will live our values:  We will continue to love our neighbors and defend their dignity. We will continue to provide what antidotes we can to the abuses that some in our nation insist on visiting upon immigrants, refugees, and asylum seekers.

I would like Jose to be home with his family, to be working at his job, to be living life uninterrupted by the threat of deportation. At the same time, I’m grateful that I get to know this man and his family. I’m thankful for the trust placed in me and others in the Sanctuary Network. I marvel at the courage this family shows—that at this vulnerable time in their lives they are willing to build new friendships and share laughter and meals, fears and hopes. They are changing me. I’ve never been one to keep my distance from working for justice, but now I am drawn even more strongly to that work. It’s inconceivable that I would not do all in my power to bring relief to immigrants, refugees, and asylum seekers. I hope you who read this blog will see that if a small congregation in the “none-zone” can offer sanctuary as we have, so can your faith community wherever you are.

[Photo Above: Jose Robles addresses the congregation at an interfaith service organized to demonstrate solidarity and support. Pastor Joanne Engquist looks on and Michael Ramos of the Church Council of Greater Seattle interprets.]

To support Proclaim members like Pr. Kari or honor someone who builds a better world, consider a gift to the #Proclaim300 campaign, which aims to raise up Proclaimers, raise awareness about ELM, and raise 300 gifts of $300 by Reformation Day, October 31, 2018. www.elm.org/donate-now (indicate #Proclaim300) 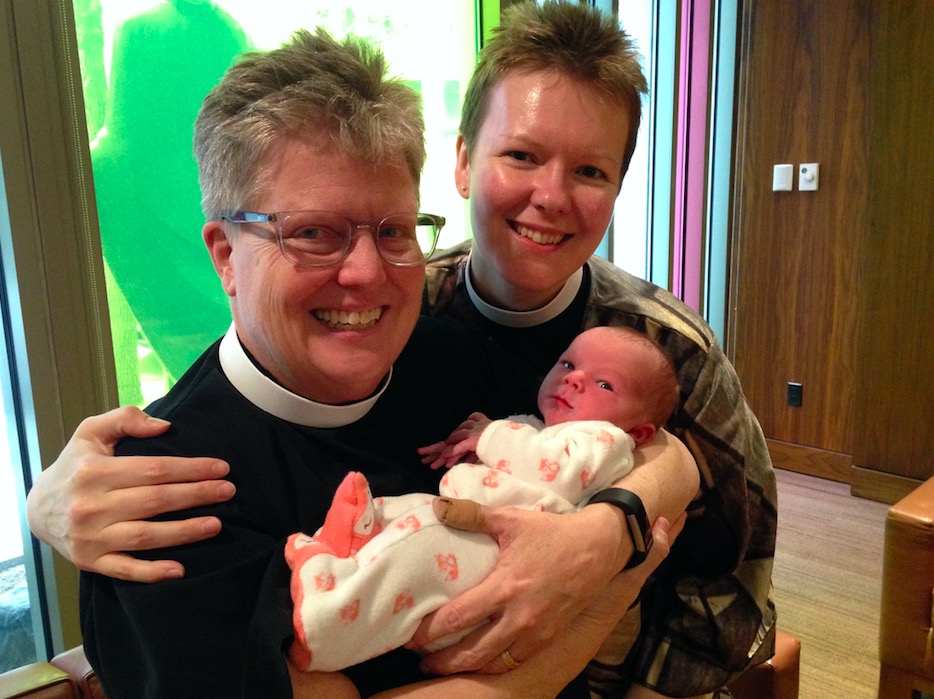 Bio: Pastor Kari Lipke (she/her/hers) is originally from a farm in rural Minnesota and currently lives and serves in Seattle, WA, with her spouse Pastor Joanne Engquist. They share life with two dear cats and a delightful dog, and are “grandpastors” to several kids and pups in the congregation.