In this time of Lent as we follow the call to journey into the wilderness, we also remember our ancestors in faith who went before us. To help us in doing that, several Proclaim members will be reflecting upon the mystics in their blog posts here during the month of March.

Each time I read the works of one of my favorite historical mystics,  a part of me is transported back to a 13 year old version of myself – lounging on my comforter, kicking up my legs behind me, pouring over the words breathlessly, devouring it as if it were a Judy Blume book.  Reading the mystics, I feel that same eager, hungry response bubbling up in my body and in my spirit.

In all honesty, a lot of these mystical writings would be just as likely to get banned today as my beloved teenage fiction stories, should people actually be paying attention. Moralists might call these writings blasphemous, improper, even pornagraphic.  And in the time these pieces were written, their authors were threatened by the authorities with sanctions or silencing bans. Many of the historical mystics in our Christian tradition were too honest, too scandalous, too sexy for the powers that be.

One of my favorite mystics is Mechthild of Madgeburg, who wrote The Flowing Light of Divinity as a German tween in the 1200s. Her visions read like romance novels, describing the relationship between the Trinity and the Soul as that of two lovers, and their prayers like sweet pillowtalk.

“Prayer is naught else but a yearning of soul … it draws down the great God into the little heart; it drives the hungry soul up to the plenitude of God; it brings together these two lovers, God and the Soul, in a wondrous place where they speak much of love.”

Church dignitaries of her time called for her writings to be burned.

Yes, there is something dangerous about mystics.
Something inherently political.
Something outside the status quo, something queer.

The ways that mystics refuse to let soul be separated from body, the way that mystics receive so intimately the love of God, the way that they release that love so ecstatically…it is all a little too threatening to people whose power is intrinsically tied to the repression of bodies and the silencing of expression.

Queer theologians today, many of us mystics, face these same sanctions when we dare to talk about the ways that we encounter God.  We are too outside the lines of acceptable respectability. In the hubris of going the places where God has led us, we are already outside of our “place,” but we’re too intoxicated with the taste of divine kisses to care. We are caught up in the whirlwind of a romance with a wild and untamed God, a force of love so strong that in its wake, it turns over tables, dethrones kings, and topples empires.

Thanks be to God. 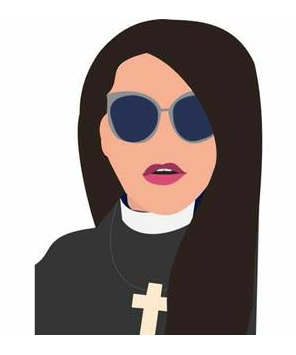 Elle Dowd (she/her/hers) is a bi-furious #pastorschool student at the Lutheran School of Theology at Chicago and a candidate for ordained ministry in the Evangelical Lutheran Church in America. Elle has pieces of her heart in Sierra Leone, where her two children were born, and in St. Louis where she learned from the radical, queer, Black leadership during the Ferguson Uprising. She currently works as a community organizer with #DecolonizeLutheranism and on weekends tours the city of Chicago in search of the best Bloody Mary.