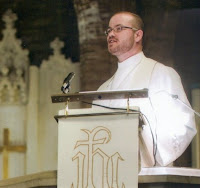 On Sunday October 10, 2010, Rev. Erik Christensen was received onto the ELCA clergy roster in the Chicago Metro Synod.

The service was held at Ebenezer Lutheran Church in Andersonville, a Reconciling in Christ congregation and strong supporter of lesbian, gay, bisexual, transgender and queer people and ELM. Rev. Patrick Shebeck, pastor at Prince of Peace Lutheran Church on Chicago’s South Side planned the service. Area rostered leaders and congregants participated in the service of thanksgiving and reception. Bishop Wayne Miller presided and preached, reminding everyone that many things are simultaneously old and new.

In a brief address during the service, Rev. Christensen spoke about the present needs of the church–naming the homeless LGBTQ youth on the streets of Chicago and the recent attention to the high suicide rates among LGBTQ youth. Many longtime leaders in the welcoming movement for LGBTQ people in Chicago and members and friends from Erik’s congregation, St. Luke’s Lutheran Church of Logan Square attended.