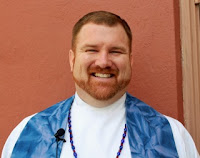 “ELM roster member Pr. Craig Minich, who serves congregations in the East Bay Lutheran Parish in Oakland and Alameda, California, was scheduled to preach on Sunday April 11Trinity Lutheran Church in Oakland. Pr. Craig is one of the 17 pastors who were ordained extra ordinem because ELCA policy required a promise of celibacy from LGBT clergy.

The worship service started, hymns were sung, the first two lessons were read, and Pr. Craig began to read the Gospel, John 20:19-31, the story of Thomas, the disciple who needs to see to believe, the story that is quoted in the rite of ordination: When he had said this, he breathed on them and said to them, “Receive the Holy Spirit. If you forgive the sins of any, they are forgiven them; if you retain the sins of any, they are retained.” (John 20:22-23)

Pr. Craig is a man of large emotions, and the Gospel lesson cast a new light on the news that been texted to his phone a few minutes before. He stopped reading, paused to compose himself, and then explained what the Church Council had done and his connection to it: I never thought I would see the day when I could be accepted on the ELCA roster.”