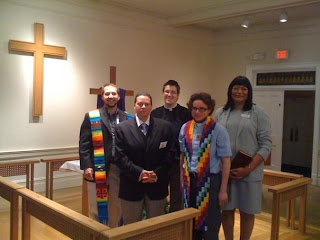 Pastor Jay and Pastor Megan met with members during a critical week as the U.S. House debated the Local Law Enforcement Hate Crimes Prevention Act (H. R. 1913), moving one step closer to the passage of the first federal law to include gender identity and transgender people in a positive way. This bill would add sexual orientation, gender identity, gender and disability to the categories included in existing federal hate crimes law and would allow federal involvement in instances when the local government is unable or unwilling to address hate crimes.

Get the story directly from Pastor Megan here: queerbiblestudy.blogspot.com