by Rev Cary Bass-Deschênes
“Pastor, I wish you would preach more about the gospel and less about politics.”

The first Sunday morning I heard this refrain it felt as if I had joined a club, one of which many of my colleagues in areas outside my “liberal” enclave of Berkeley, had long been members. But the sermon the Holy Spirit directed me to preach that Sunday morning was about the divisiveness within the community of Christ, focusing on the calling of Christ to treat one another with love and kindness.
“You called someone ‘racist’”
Now wait a second! I most certainly did not call anyone racist in a sermon. The only time I’ve described anyone as ‘racist’ in a sermon would have been first and foremost, myself, in how I benefited from white privilege and was oftentimes negligent in viewing how my non-white, and in particular my Black colleagues regularly experienced discrimination in ways that seemed so subtle to me but were so obvious to them.
So the word ‘racist’ was not in my sermon, and I don’t think I said ‘racism’, did I? However, I could see where this was going. I contextualized a belief I held about why we were where we were: that much of our electorate chose our leaders under the misguided guise of a hierarchal system anointed by a Creator that upheld patriarchal, white supremacy as its standard for the ordering of humanity. That wasn’t simply something I read in a Pathos blog, it was something I experienced firsthand; and not in the comments section of a Time magazine article about the president.  It was in reading the comments on a Facebook post of a first cousin once removed.

Indeed, that was what it was in my sermon that triggered that response from this particular parishioner, who was longing for a message of good news, but instead felt called out by an association with being white. They were so tired of being forced to experience white guilt yet again. Yes, the president is awful, and yes, black people are still the victims of discrimination, but we’re doing the best we can, pastor? I came here to hear that Jesus loves me, not that I should flog myself for being white!

I’ve been a part of my own people’s fights.  I marched on Washington in 1987 after a Supreme Court decision failed to decriminalize sex between consenting men, and marched again in San Francisco in 2008 when voters in California decided to define “marriage” as solely between “man” and “woman.” Around 2008 I also began joining in the struggle for trans rights, hoping to ensure accessibility, acceptance and safety for trans folx. I have personally experienced discrimination, and feel even more disconnected since the current administration came to power in 2016.

But, in many ways, I’m in the best years of my life. I’ve experienced more personal growth since I turned 50 years old, spiritually as well as emotionally; I’ve come to a level of comfort and acceptance about my age, my gender identity, my sexuality, and how that aligns with God’s plan for me. God has created a wonderful being in me, and as I love God, I have come to love God’s creation as it exists within myself. And while, imperfect as I nevertheless still am, it’s not always easy to love myself, when I actualize it, it’s a very good feeling to have finally reached that after so many years of self-spite and self-doubt.

I’ve also come to acceptance of my whiteness, that while I can make conscious efforts to deconstruct it, no matter how much anti-racism or whiteness examination work I do, I will always bear the privilege of it in new spaces and will often be greeted with suspicion by new individuals. Bearing guilt about it is neither constructive, nor asked for. Awareness of it is, and using that privilege to bring about positive change for people is the best way that I can exemplify Jesus’s call in Matthew 22:39 to love my neighbor as myself.

But whereas God’s love is unconditional, my love seems to have boundaries. To me, this upcoming election is serving to emphasize such seemingly irreconcilable differences within our society, differences that extend well beyond the borders of our own now dysfunctional nation. That my values of social justice and equity and racial equality, which for me come directly from the Gospel, seem to be at odds with others’ values of justice.  The hostility that seems to be concentrated within the current administration and one political party toward me in my sexual and gender identity and people of other races and national origin has enablers, those that consistently vote to put those people back into power and control over public policy.  And it is not some tiny minority of voters who are among them, but a large and vocal minority that comprises not less than 1 in 3 of our nation’s population.

Matthew 5:43-45 tells us to love our enemy.  The Greek understanding of the word ἐχθρός (echthros) is of an individual that would seek to cause you mischief or do you harm.  I grew up in a time where children pledged their allegiance to the United States, and that we had a clear enemy, the Soviet Union. Since their collapse, our government has been striving to demonize nations in order that we have a clear and present danger, but as presidential administrations rise and fall, so do these categories of enemies. Today it is easier for us to look within at our cousins, our parents, our siblings. Maybe even our own children. Not just our families of blood but also those that Jesus has called us together: “these are my siblings”, Christ says. And now, my sibling in Christ is also the one who seems to be personally bent on causing me mischief or wishing me harm.

But Jesus tells me to love these people and pray for the ones who persecute me. November 3 seems like it’s the most important election of our lives, but, according to the polls, my vote will be fully canceled by someone whose effect is to persecute me. If this is not my enemy, my echthros, then who is? And while my cis-male-appearing, white, middle aged self is saying, you must do as Jesus says, my queer, non-binary, HIV positive, neurodivergent self is crying out “that’s easy for you, someone with privilege, to do!”

So yes, it’s really hard to love my enemies. But maybe loving them means hearing what they have to say about issues, understanding how they reached that opinion, knowing that they’re nevertheless human beings beloved by God and saved by grace without accepting their opinion about human rights, the climate, reproductive rights or social justice as Christ-centered or inspired by God. Being able to “agree to disagree” with them, all the while knowing that the Good News of Jesus nevertheless commands me to call out injustice, name White Supremacy for what it is and declare demonic the post Great Awakening evangelicalistic idea of a hierarchal order of humankind and to name humanity as poor stewards of God’s gift to us, the creation, the world. And preach that Jesus loves all of us, along with our brokenness.
It may sound like politics when I preach, but maybe the Good News is there too. 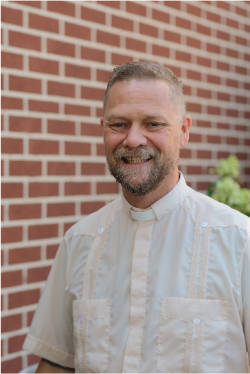 Cary Bass-Deschênes (they/them) has been the lead pastor at Lutheran Church of the Cross in Berkeley, California, since 2015; a small congregation with big works; serving the homeless and food-insecure community of San Francisco’s East Bay with meals and a Food Pantry.  They live with their husband, Michael, in their home in Richmond, with their two dogs, Luna and Esby.  They have recently published their third short story, “The Chaos Artist” in the graphic novel A Matter of Right by Variance Press, due out in late Fall, early Winter 2020-21 under the name, Cary Michael Bass.