For the past year, Extraordinary Lutheran Ministries’ Board of Directors and Proclaim Community have been engaging in conversation around the topic of polyamory. For many in our midst, polyamory is a blessing and is something through which they have received great spiritual and personal fulfillment. There are also many in our midst for whom the topic of polyamory is quite different from their experience and understanding of healthy relationships. We recognize this tension within our community and encourage more conversation and understanding.

What follows is a reflection written by a polyamorous Proclaim member. It is not ELM’s intention to make a public statement about polyamory with this blog post so much as to continue the conversation and to share a personal reflection.

“My boyfriend’s boyfriend is a pussy stunt artist.” There’s a lot to unpack there, but I’ll start with myself. I’m a seminarian who identifies as queer and uses various pronouns. I appear male/masculine and identify as AMAB (assigned male at birth). My boyfriend identifies as a FTM trans man. We’re in a polyamourous relationship. Aside from being highly involved in the queer/trans community where we live, he’s also a CODA (Child Of a Deaf Adult) and makes his living as a sign language interpreter. He had been dating his boyfriend for multiple months before I joined the mix. My boyfriend’s boyfriend is a performer who uses their pussy to do stunts on stage for money. They identify as genderqueer and use they/them/their pronouns.

Had someone told me that I would be in love with a trans man, on the verge of going on internship, I would have laughed in their face. As I started seminary, I didn’t hold much hope in finding someone to fulfill my romantic needs. Dating a graduate student is hard, let alone one who is studying to become a pastor. Plus, to love me is asking a lot. I have baggage, an uncertain future, and I’m essentially taking a vow of poverty. These kinds of things aren’t the most marketable prospects in the dating scene. But with my boyfriend, it works. 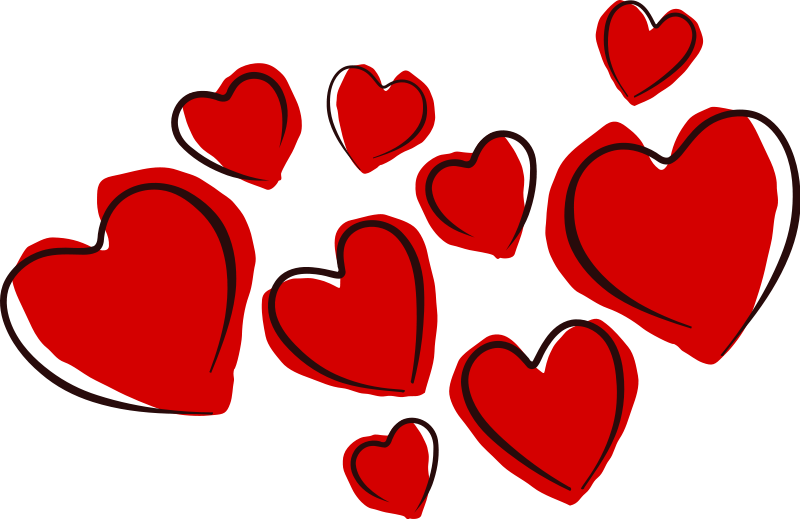 Monogamy puts a lot of pressure on me. I start to panic once I realize that I might not meet the needs of my potential romantic partner but I’ve never had to worry about that with my boyfriend. I know that he’s capable of meeting his needs with other people, and that he’s not just settling for me. I don’t have the anxiety that I’m not willing and able to do everything that he wants in the bedroom (or living room, or hallway, or backyard, or streets of a major city). For the first time, I’ve been able to grow with my partner into something together. I think what clinched our relationship for us, is that we can just be ourselves around each other. We went from talking about important social justice issues around intersectional identities to a complete and utter giggle fit half an hour later. My boyfriend connects my heart, head, spirit and body in a way no one else has every come close to. This is a freedom I’ve never known before entering into this kind of relationship.

Documents within the denomination place primacy on heterosexual monogamous marriages. As a seminarian, I never fully understood why the church and my candidacy committee had stake in what I did in my bedroom (or kitchen, or car, or darkened alley). Saying that monogamous relationships are the only relationships that foster trust and deep spiritual connection is patently false. My monogamous relationships have been my least trusting relationships. But there comes a time in my life that I need to be authentically myself and willingly break with doctrine and tradition.

Finally going all-in and joining a polyamorous relationship made me understand myself in a new way. It is like an affirmation of baptism for me. Baptisms have a revelatory function– wherein the newly baptized are joined into the mystery of Christ’s death and resurrection. The ritual signifies a new dedication, a breaking of old ways and an invitation into a larger group. Not only do the newly baptized pledge to renounce sin, but the assembly gathered invest themselves in the formation, growth, and wellbeing of their new family member. Why can’t relationships be like this? Why can’t joining a romantic relationship be a holy act that connects us to the divinely infinite? Jesus is a bit of a slut; he loves everyone (we can’t even put a number on the people that he’s been inside). I would never expect him to turn his back on others just for my sake. Plainly put, Jesus loves infinitely, so why shouldn’t I? 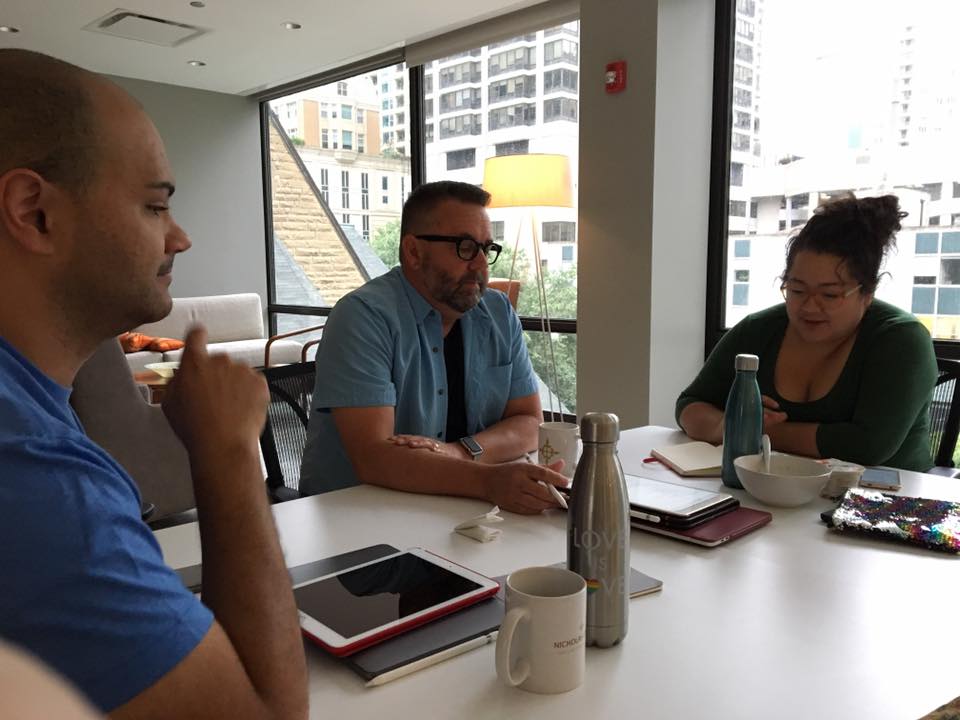 Board Members who were present included Matt James (Co-Chair), Emily Ann Garcia (Co-Chair), Margaret Moreland (Secretary), Emily Ewing, Matta Ghaly, Jeff Johnson, and Brad Froslee. ELM’s Treasurer, Charlie Horn, was present as well.  ELM staff who were present included Amanda Nelson and Olivia LaFlamme.  Board members absent from the meeting included Barbara Lundblad and newly joined board member Angela Shannon.
This past October ELM’s Board of Directors met for one of two annual in-person meetings at the beautiful Nicholas Center in Downtown Chicago. Each meeting we endeavor to remind ourselves of who Extraordinary Lutheran Ministries is by keeping our Explicit Practices before us, we share them with you now as a reminder of who you are as a Proclaimer, supporter, ally of ELM and the incredible LGBTQIA+ ministers that continue to transform and enrich the world.
ELM Explicit Practices:
With a fuller slate of staff, we all felt there is great energy and potential as God’s Spirit leads us into the future.
We spent time dreaming about where we might hope to see ELM go as we move forward together toward the edges of our work.
Guided by our Explicit Practices listed above, we asked ourselves:
We dreamed of how we might continue to support Proclaim members doing fabulous, ground-breaking ministry around the country and around the world.
We dreamed of how we might continue to be a beacon of God’s justice in-breaking into God’s world:
These conversations will guide the board’s and staff’s work in the coming months as we live into our dreaming.
We also had the opportunity to meet with the President of ADLA (African-Descent Lutheran Association), the Rev. Lamont Wells.  ELM and ADLA got the chance to get to know each other, and start imagining what kinds of next steps we might take to work more closely together in the future.
The Board’s next meeting will be a conference call on December 20th.  The next in-person meeting with be held March 14-17, 2019 in Berkeley, CA.
Questions or concerns you may have for the Board may be directed to Executive Director, Amanda Nelson (amanda@elm.org) who will pass them along to the Board’s Executive Committee. 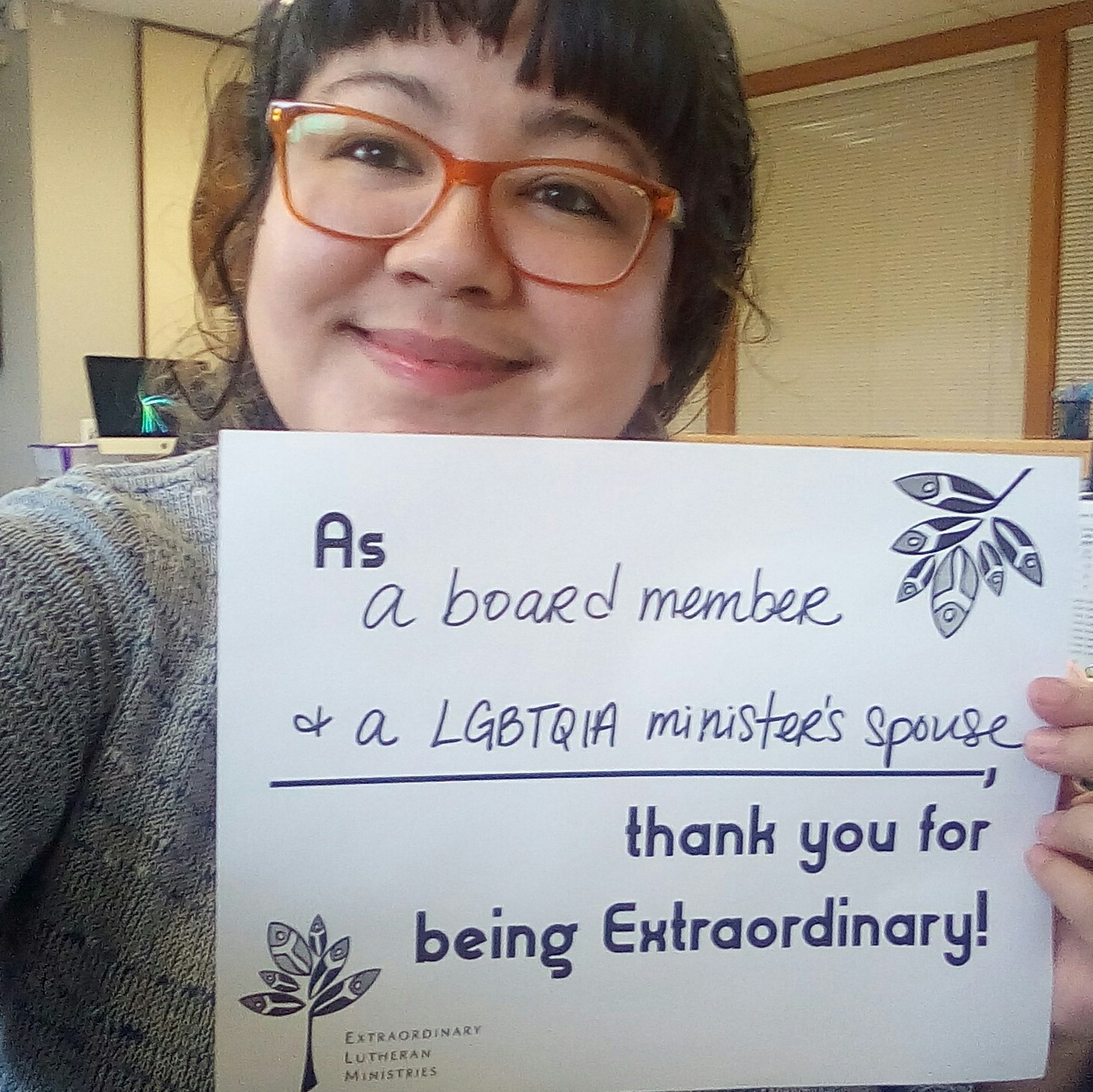 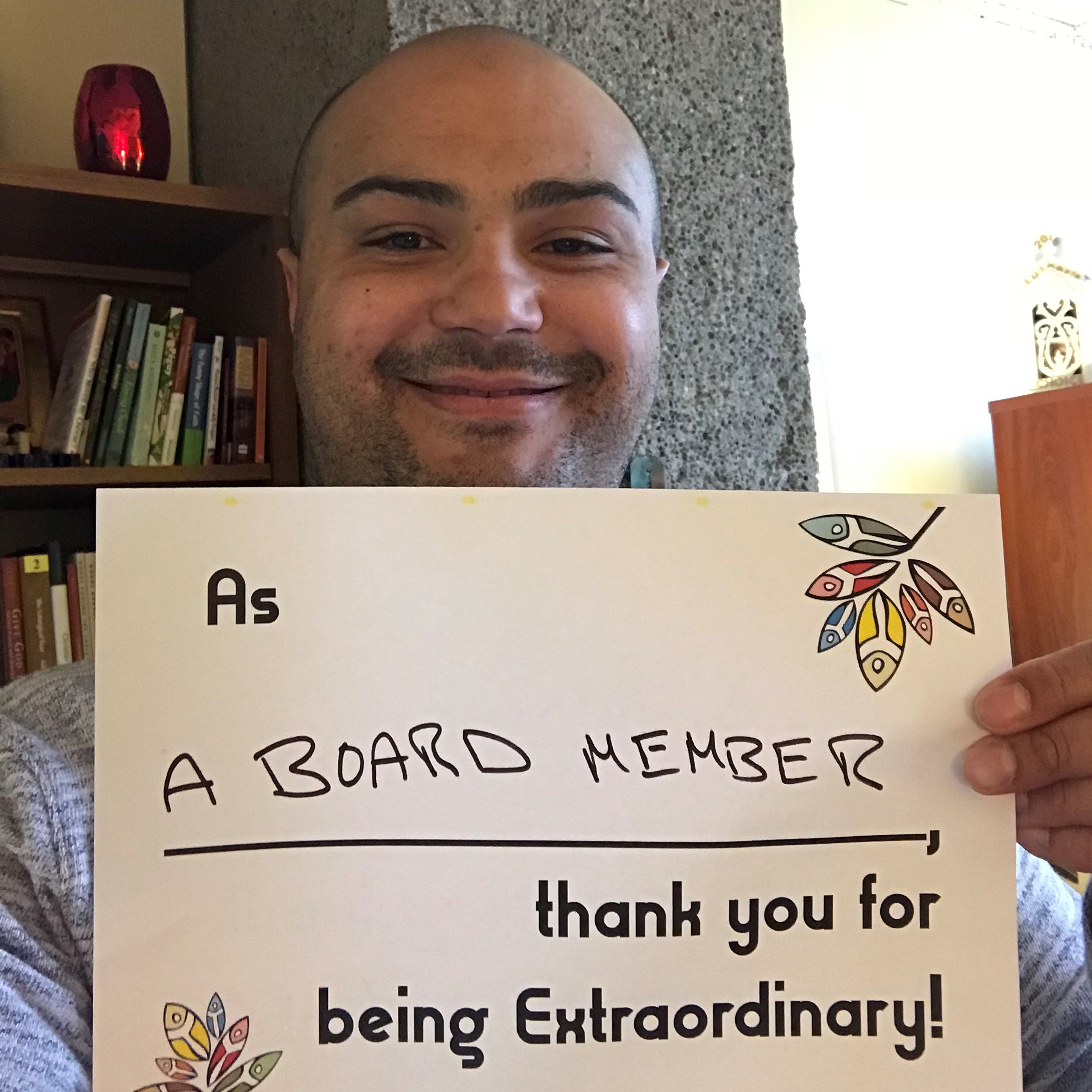 By Margaret Moreland and Bennett Falk
We met Linda Christensen only twice: once at her son Erik’s extraordinary ordination in 2006; the other at Erik’s wedding to Kerry. She was so excited about both events.
I (Margaret) had heard from Erik about Linda several times before I met her. Whenever Erik talked about his journey to ordination, he always mentioned that his mother had been instrumental in nudging him toward the Extraordinary Candidacy Project. 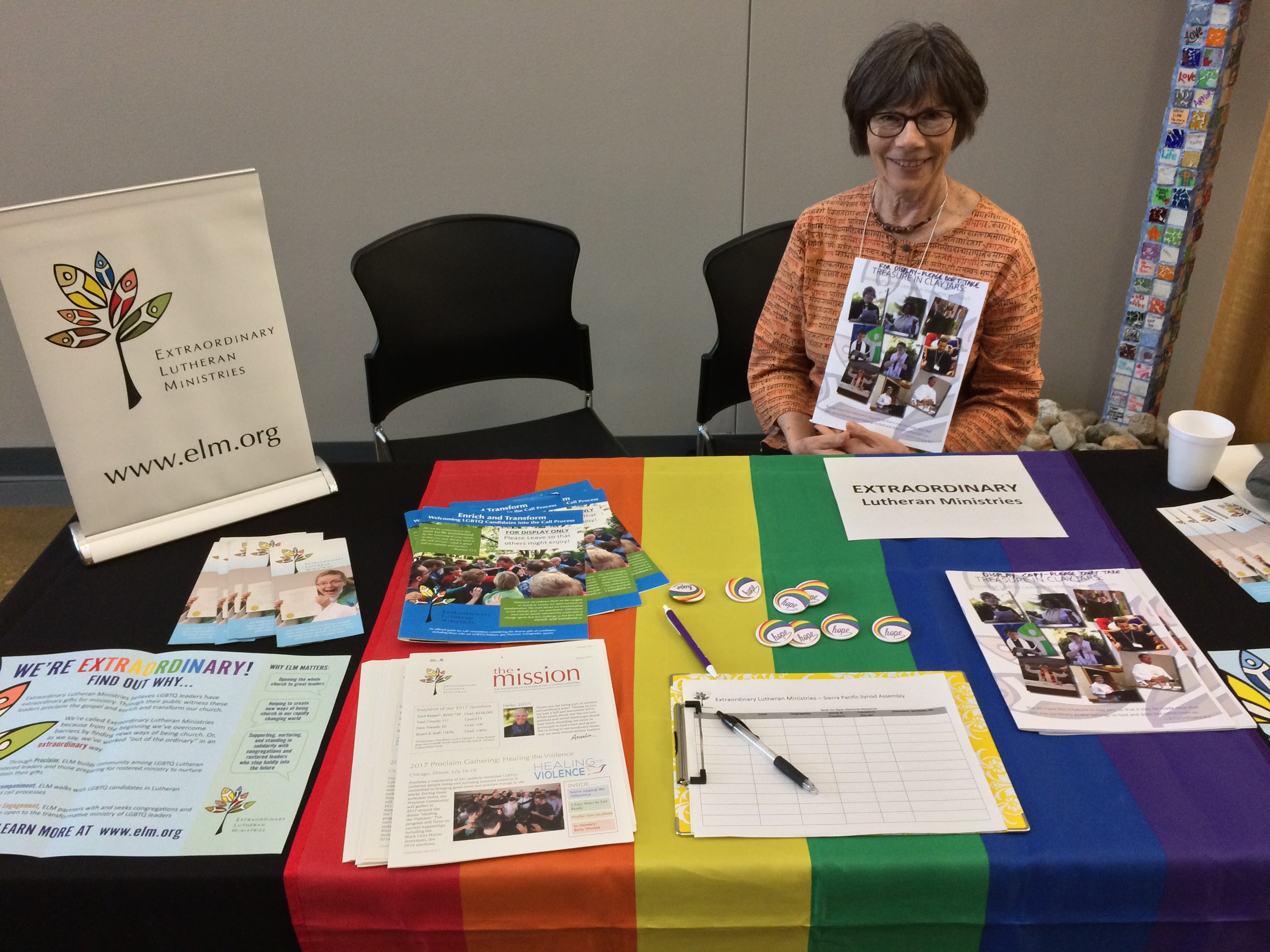 Erik describes the first nudge this way:
“I was past college and considering seminary, but had no sense for how that would work as someone who’d come out in college and had no intention of being closeted. Mom mentioned a small church in San Francisco that participated in the “extraordinary” ordinations of three gay and lesbian clergy … and they had a cookbook: “Those People at That Church.” I remember her showing me the cookbook, and flipping through the pages,wondering who those people were.”
Linda remained a friend of Extraordinary Lutheran Ministries: a regular financial contributor who, with her husband Larry, helped organize the Goodsoil Singers at the 2007 Churchwide Assembly and staffed the ELM information table at the 2017 Southeastern Iowa Synod Assembly.
Former ELM Executive Director Amalia Vagts remembers:
“Linda mailed a hand-written check each month for all the years I worked for ELM. Each month she wrote “Gratefully” in the memo of her check.”
Linda was truly a “friend of ELM,” but that barely hints at what there is to celebrate in Linda’s life.
Linda Christensen was a champion of what can only be called “tenacious love,” love that does not give up.
Tenacious love is not “safe.” It is not admiration of the already successful. It is risky; it is love for those who are pushed aside, left behind, ignored. It is love that does not acquiesce to injustice, love that is never embittered.
Tenacious love is not easily confined to the home or the classroom (or, for that matter, the church). In May, 1998 the Des Moines City Council considered (and ultimately rejected) an amendment to add “Sexual Orientation” as a protected class to the city’s Human Rights ordinance. In a contentious 2-hour meeting, Linda spoke: “I didn’t know how to have a relationship with God where you hate the sin but love the sinner, because having lived with my son for 18 years and knowing him, there was no part of my child I could hate.” Tenacious love speaks its mind.
More than a year later, when Iowa’s governor signed an order to protect LGBTQIA+ people from hiring discrimination in the executive branch of the state government, opposition forces rallied in Des Moines to demand that the order be revoked. The Des Moines Register reporter who had covered the 1998 city council meeting recalled Linda’s words and quoted them again: “The world needs a lot more Linda Christensens.”
On July 31, 2018 Linda passed away at her home in Des Moines, Iowa surrounded by the family she loved so dearly.
We give thanks to God for the life of Linda Christensen, and we pray for the strength to be agents of tenacious love. 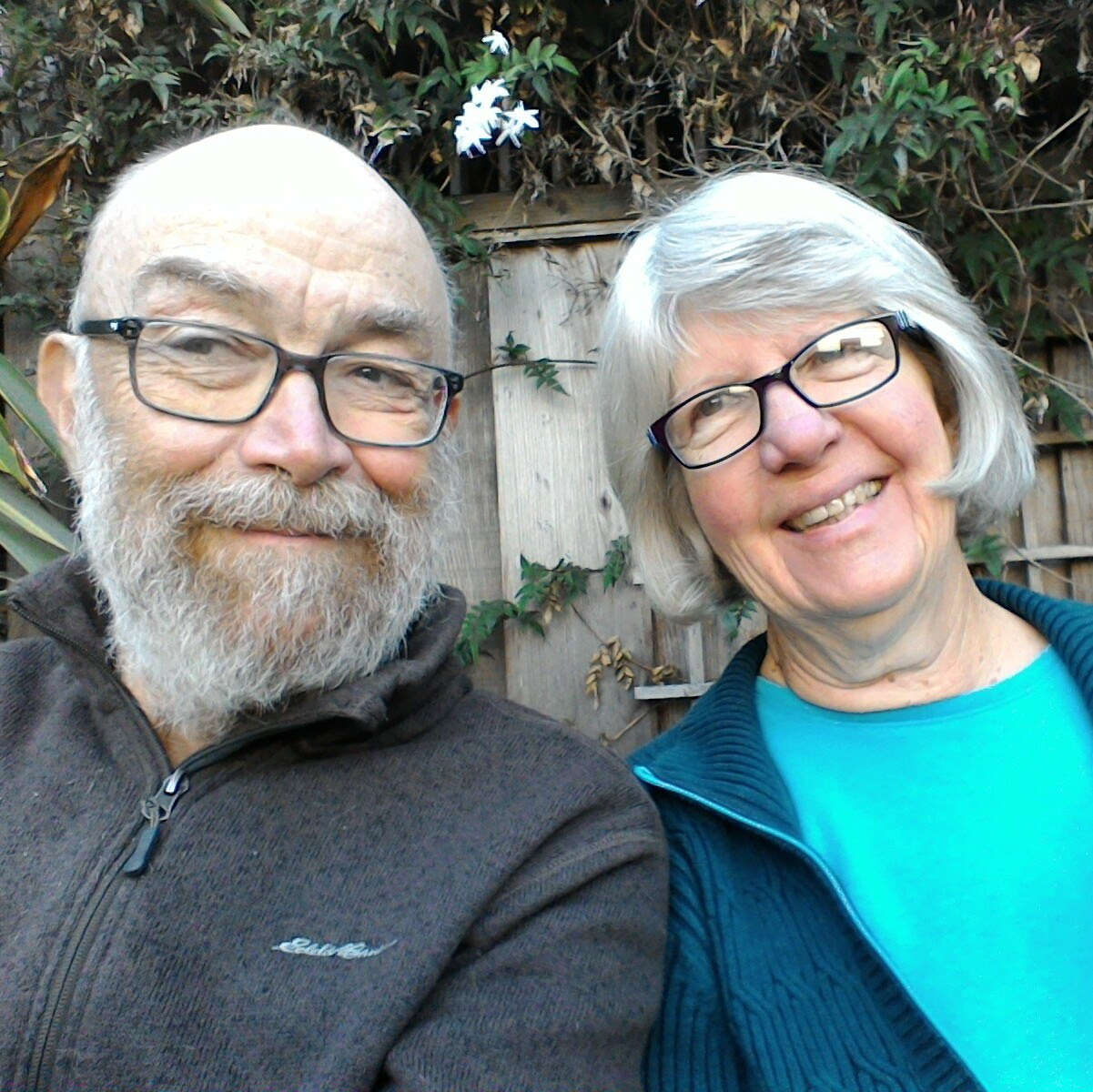 Bio: Margaret Moreland and Bennett Falk
have been “the newlyweds” since their marriage in 1971. Margaret is secretary of the ELM Board. Bennett is known for Goodsoil Radio and Lutheran True Confessions (lutheranconfessions.com).