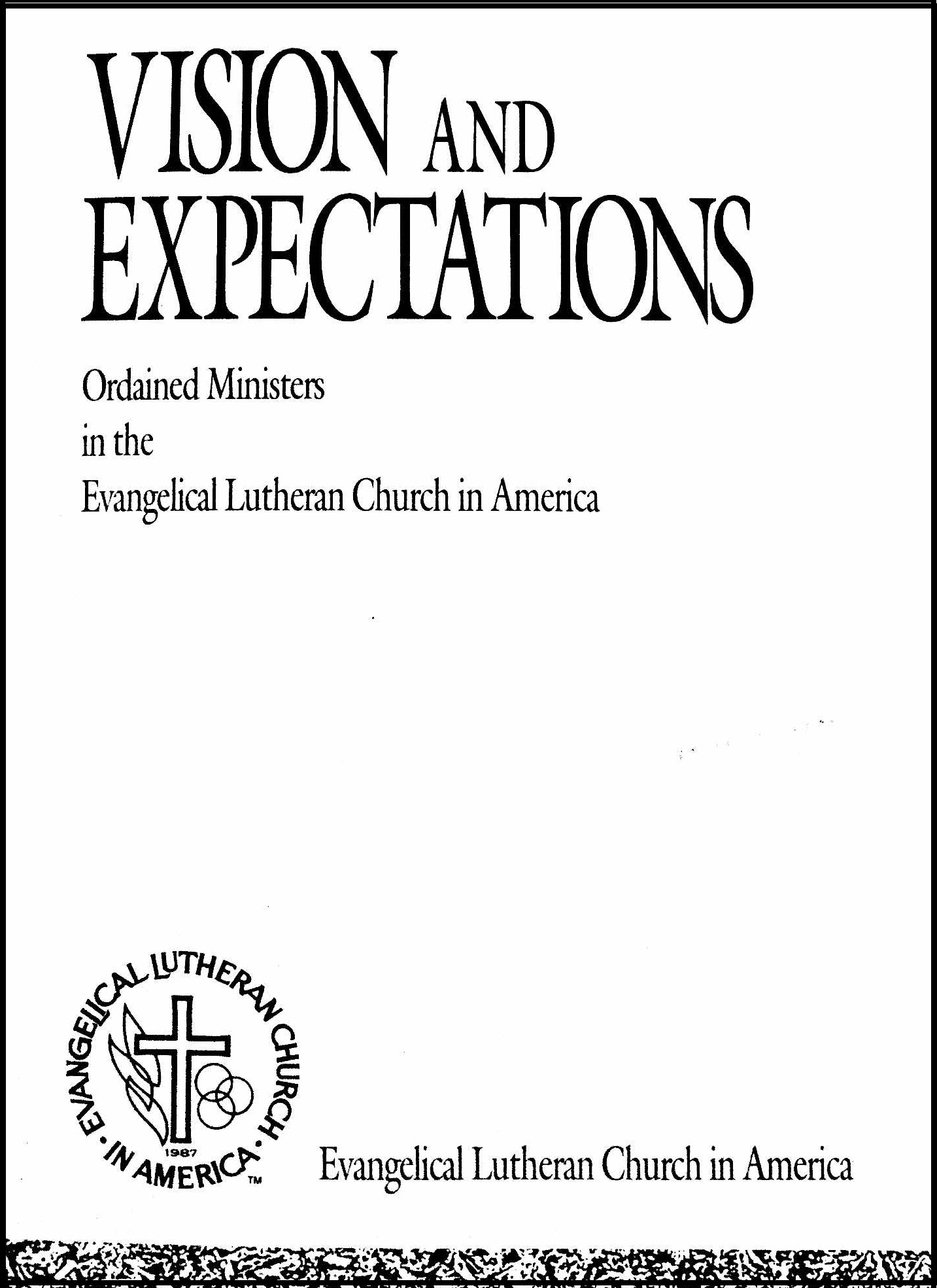 “One vision. Many expectations.”

This is a comment I’ve heard over the years in reference to a church document called Vision and Expectations (click to read the original, 1990, version). It’s said as a church-insider joke to address the fact that the document is often mistakenly called, “Visions and Expectations.”

Most Lutherans have never heard of Visions & Expectations (click to read the 2017 version). Those involved with the candidacy process are all too familiar with this document, which holds a complex and elusive role in the process of becoming a rostered minister in the Evangelical Lutheran Church in America.

But few people know the way in which the roots of Extraordinary Lutheran Ministries, the Evangelical Lutheran Church in America, and Vision and Expectations are intertwined.

Extraordinary Lutheran Ministries came about in part because four seminary students came out publicly as gay in the late 1980’s. This happened just as the Evangelical Lutheran Church in America was being formed. These two church events happened in the context of a changing society – gay and lesbian people had started “coming out” in record numbers and the AIDS crisis was ravaging communities and families.

The moment could have been a prophetic one for the newly formed church. Instead, however, it was widely considered a “crisis.” (See Christian Scharen’s excellent book Married in the Sight of God for an eye-opening and thorough explanation of how theology is used in a perceived crisis. In this case, Scharen highlights how the ELCA candidacy process – and Vision and Expectations specifically – is used to create compliance with traditional views of sexuality).

Those who were in candidacy in the American Lutheran denominations in the late 1980’s and early 90’s will recall many ways this played out as the new ELCA sought to find ways to prevent condoning gay and lesbian relationships without condemning gay and lesbian people. Some seminary students remember that everyone was asked if they were “homosexual.” Heterosexual allies started refusing to answer in support of their colleagues.

This practice and others were soon dropped and the church turned to creating policy. How and why policies were developed relate in part to the various agreements made among leaders of the Lutheran church bodies (the American Lutheran Church, the Lutheran Church in America, and the Association of Evangelical Lutheran Churches) whose merger created the ELCA. Policies consistent between the church bodies carried over to the ELCA, but in cases of inconsistency, the ELCA would have no policy on the matter until it created one. This meant the ELCA had no policy forbidding the ordination or calling of a pastor in a same-sex relationship. And they now had candidates approved for ordination (by the American Lutheran Church and the Lutheran Church in America, prior to the merger) who were publicly identifying as gay. This multi-layered process, combined with the decision at the time to exclude gay and lesbian people from ministry, led to the convoluted and insincere process which continues to impact the lives of candidates for ministry today.

A first draft of a sexuality policy related almost entirely to “homosexuality” was circulated and then rejected during an ELCA Church Council discussion in 1990. A new document based on the four questions asked of candidates in the Rite of Ordination emerged and covered a range of topics: from being a “faithful steward of time, talents, and possessions” to being “exemplary stewards of the earth’s resources.” The question relating to “holy living” delved into the sexual lives of ministers. Single ministers were expected to live a “chaste” life. Married ministers were expected to give “expression to sexual intimacy within a marriage relationship that is mutual, chaste, and faithful.” Ministers “homosexual in their self-understanding” were expected to “abstain from homosexual sexual relationships.”

This document was called Vision and Expectations. It was adopted by the ELCA Church Council in October, 1990.

One person who was an ELCA Church Council member at the time said, “I think everyone on the Church Council knew Vision and Expectations was written to forbid ordination of gay and lesbian people in the ELCA rather than about care of elderly parents or avoiding excessive spending.”

That early observation was confirmed time and time again by the way that Vision and Expectations was used almost exclusively until 2009 to remove gay and lesbian people from candidacy, despite many other specific provisions in the document. As one colleague commented, “The ELCA never refused ordination to someone because they didn’t recycle” (As noted above, Vision and Expectations requires “exemplary stewards of the earth’s resources”). And while single and heterosexual candidates could be (and occasionally were) removed from candidacy for sexual activity, there was not widespread enforcement of this, as there was for people identifying as gay, lesbian, or bisexual.

The introductory letter to Vision and Expectations states that the document is “offered” to leaders “to inform their lives of service, their discernment and deliberation.” The story about Vision and Expectations has always been that it is not a “disciplinary” policy (unlike the document it was based on, Definitions and Guidelines, which is a similar document and which is a stated disciplinary document for rostered leaders).

But as it is experienced by candidates, Vision and Expectations is used as a tool of compliance around matters of sexuality. Those who do not comply are delayed or removed from candidacy.

Like other church conversations about sex, the document is veiled in a sense of euphemism and secrecy. The ELCA’s webpage for discerning candidates contains a number of documents, but Vision and Expectations is not one of them. The Candidacy Manual lays out the entire process of candidacy. But the very first mention of Vision and Expectations occurs on page 18. Tellingly, it’s referenced in the following context: “When working with an applicant or candidate who is in a same-gender relationship, the Candidacy Committee will follow the same processes for discernment and evaluation as with all other candidates and will use the standards of this church and the Vision and Expectations document.”

The seeds of euphemism and secrecy around sex that were laid with Vision and Expectations came to fruition in the 2009 human sexuality statement discussions. The 2009 policy decisions opened the doorway for people who were in what policymakers awkwardly (and politically) called “publicly accountable, lifelong, monogamous, same-gender relationships.” But the church did not use the 2009 decisions to explicitly welcome the gifts of LGBTQ+ people for ministry, did not equally support committed relationships, and specifically did not recognize relationships between LGBTQ+ people as “marriage.”

In fact, even to this day, all persons entering candidacy must agree to “uphold an understanding of marriage that is biblically informed and consistent with the teachings of this church.” The footnote to this statement reads, “This ‘Vision and Expectations’ document uses the terms ‘marriage,’ ‘marry,’ and ‘married’ to refer to marriage between a man and a woman.”

As one of the very first steps of the process, a potential candidate for ministry is asked to check a box next to each of the following questions:

Are you familiar with the document “Vision and Expectations?”

Do you intend to live in accord with its standards of conduct as a candidate and as a rostered minister in the ELCA?

At this point, checking the boxes is optional. And the significance of the document often won’t be made clear until later in the process. Direct questions about sexual activity are typically not asked, but those who have entered or gone through candidacy can tell you it is omnipresent throughout candidacy via references to Vision and Expectations.

The final reference appears as part of the final approval process and the ambiguity ends with these words, “At approval, candidates will be asked and must state a clear intention to live and conduct themselves in a manner consistent with Vision and Expectations” (page 63 of the recently revised ELCA Candidacy Manual).

For gay, lesbian, and bisexual persons, the answers to those two questions ended candidacy for many until 2009 as Vision and Expectations required them to choose between following a call to ministry and following a call to relationship. Candidates of all sexual orientations today continue to view the document as relating primarily to the sexual activity of ministers.

Author R.W. Holmen provides a rich overview of the early days of Vision and Expectations (and its companion policy, Definitions and Guidelines) in his book Queer Clergy, noting that once adopted, the document “would serve as denominational policy preventing LGBT ordination for the next nineteen years.”

Dr. Jeremy Posadas, who served as part of the Goodsoil Legislative Team organized by ReconcilingWorks, was centrally involved with others whose hard work led to the changes in Vision and Expectations that now allow LGBTQ people to serve in ministry. Posadas reflects on the irony of the interconnected history of Vision and Expectations and Extraordinary Lutheran Ministries:

The decades of movement work demonstrate how much the ministry of the Gospel always transcends and exceeds the juridical limitations humans attempt to put on it. Extraordinary Lutheran Ministries (and the Extraordinary Candidacy Project and Lutheran Lesbian & Gay Ministries before them) manifests the Gospel in word and in deed. In many ways, Vision and Expectations had the very opposite effect of what was intended: it occasioned hundreds of LGBTQ candidates and ministers (and the congregations who have supported and rostered them) living more fully into the whole vision of ministry from which Vision and Expectations sought to keep them out.

Vision and Expectations was created in response to a perceived crisis. It was drafted primarily to bar gay, lesbian, and bisexual persons from becoming pastors. Present day conversations about Vision and Expectations should include awareness of this and how its history and roots relate to today’s candidacy process.

The actions of 2009 opened the door to ministry for LGBTQ+ people. The hundreds of LGBTQ+ people who are new serving, preparing for, or considering ministry are the beautiful result. It is problematic and disheartening that the church continues to use and create policy that does not invite the experience and perspective of LGBTQ+ people.

Our church has a new prophetic moment to consider these questions. How will we engage in new conversations about healthy, just, consensual, life-giving sexuality? What are new ways by which our church could express its vision and expectations for rostered ministers?

In closing, I offer one more passage from Vision and Expectations, this one appearing in the original and present versions:
Ordained ministers are expected to acknowledge the church’s past and present failures and to lead the church in its repentance and renewal.

What has your experience been? I invite others to share their perspective as we create a dialogue about this moving forward. I welcome your comments or submitted guest posts.

What I say to you in the dark, tell in the light; and what you hear whispered, proclaim from the housetops.

Amalia Vagts, Executive Director of ELM (until July 31!), is extremely grateful for the many folks who reviewed and contributed to this piece as it evolved, and has been carrying a now dog-eared copy of “Married in the Sight of God” around with her for months now.  And don’t even get her started about what V & E has to say about hospitality . . .

4 Replies to “A Short History of Vision and Expectations”