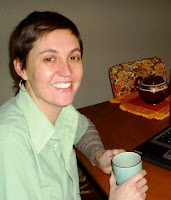 In this morning’s reading, Paul writes to the people of Corinth about orderly worship.

It was a confusing time. People were feeling liberated. They were casting off some of the former ways and trying out new ones. And things were getting a little out of hand.

When Pastor Blair invited me to share some words for this morning’s chapel, he offered me the chance to select my own text, one that might more closely resonate with the work I do through Extraordinary Lutheran Ministries. And you know, at first, I was a little tempted.

There are a lot of great texts in the Bible that help talk about the experience of gay and lesbian Christians, which is the focus of my work. But it turns out this text asks one of the chief questions facing me in my work with Extraordinary Lutheran Ministries and facing many of us in the Evangelical Lutheran Church in America these days.

“What should be done then, my friends?” Paul asks the Corinthians.

Things can feel pretty uncertain when you are starting something new and the rules aren’t clear.
And it’s especially confusing if you’ve been operating under a set of assumptions that are now called into question. Let’s imagine we’re in Stewartville, Minnesota in 1985 and the Vagts kids and the Olson kids are out back doing what we did many summer evenings…playing Kick the Can.

We knew that you counted to 20 and then yelled “ready or not!” signaling the start of the game. Most kids knew that. We also knew that climbing the fence next to the Olson’s solar panels, which led from the front to the backyard, was strictly off limits. It was a cruel fate of geography, as it prevented us from making a clear circle around the house, and woe came to the kid who made a clean breakaway, only to find she was trapped up against the chain link with nowhere to go.

We also knew the tree house was off limits during these kinds of games (my brother Thatcher has received too many concussions), and the secret escape route was between the garage and the neighbor’s fence. We knew our limitations and our freedom. So it was very frustrating each time some new kids would play with us and not know these special rules. The game would just be underway and some kid would scale the fence, or go in the tree house, or call someone out for using the garage escape route (which was permitted).

Isn’t this how it always went? A few people would want to quit in frustration because in our attempts to make and clarify all of the rules, the game itself would be entirely missed.

Well, it made a few people want to yell, “TIMES!” And it makes the Church want to create some order.

When faced with questions of order, Paul could get very precise. This text makes for a comical read if you read it carefully. First of all, there is the subject matter–speaking in tongues. I mean this is pretty far out stuff for Lutherans. Come to think of it, we probably are more ready to talk about a married gay pastor than we are for people bursting out into prophetic speech in the middle of church.

But if speaking in tongues were to happen in worship, as it was at that time, Paul has some ideas about how to keep things from getting out of control “If anyone speaks in a tongue, let there be only two, or at most three, and each in turn; and let one interpret.”

My personal favorite verse from this section comes a bit later…”If a revelation is made to someone else sitting nearby, let the first person be silent.” I find this particular verse helpful, not only for worship but also at the movie theater.

In chaos, we seek order. Paul tells us that in chaos, God seeks peace. One way we achieve this peace in community is by making rules, by calling “Times.” We’ve all experienced this. Certainly, the communities Paul writes to were experiencing this. There are times when putting things in order creates peace. And then there are times, where we think we are creating order, but the result ends up being the opposite.

We don’t have to look any further that this morning’s text. And I just have to take pause again and thank Pastor Blair for inviting me to give the chapel talk this morning. How could I resist talking about a passage that speaks against women speaking in church?

Let’s talk about this section of today’s text–the part that just pops up rather out of context and is mysteriously in parentheses. You maybe didn’t know that–but the whole section against women speaking in church is in parentheses. Is it an aside? The parentheses are like a whisper. Some theologians suggest these passages are editorial commentary written by someone else.
What to do with passages like this one? With order like this kind? Some theologians try to explain what Paul was writing about saying this passage is not about preaching; rather it was about gossip or idle “chit-chat.” And so on.

My reading of this section is that there was some sense of disorder and someone wanted to make a rule about it. Someone called a “Times.”

How are we to tell the difference? What is simply creating order for the good of the community? And what are rules that become barriers between God and God’s people? The bible has some great stories and lessons for this question, and it’s something Paul hints at in this text.

“Let all things be done for the building up,” Paul writes. Could this be our guide?

“Let all things be done for the building up.”

Since August, I have been working with the ELCA as they try to figure out how the gay and lesbian pastors who are on the Extraordinary Lutheran Ministries roster (and other partnered gay and lesbian clergy) will join the ELCA roster. Many people believed this happened months ago–that it happened automatically.

After all, the movement that is Extraordinary Lutheran Ministries was born from ELCA congregations and ELCA pastors and seminarians who were soon to become ELCA candidates for ordination. For twenty years, this movement has developed a parallel candidacy process based on the ELCA’s. The actions of this movement are rooted in the Lutheran confessions. For twenty years, this movement has worked with ELCA congregations willing to break policy in order to call an openly gay, lesbian, bisexual or transgender pastor. This movement is of, about and within the ELCA.

But these times are chaotic, and in chaos we seek order.

And all too often, order comes in the form of rules. This original wound within the ELCA was born from chaos. In the early days of the ELCA there were a few gay seminarians coming out, people started to get anxious, someone called a “TIMES!” and made a rule. “If you are gay, you have to be celibate.” That was the rule. The desire was to create order. Instead, it became oppression and something that has prevented many gifted leaders from serving in the ELCA and many gay, lesbian, bisexual and transgender people from seeing themselves as full members of our community. “Let all things be done for the building up.” Paul writes.

In August, the wider ELCA community started to see what the ELM community caught on to 20 years ago–the celibacy rule doesn’t fit with Jesus’ vision of God’s kingdom. So now we celebrate the joy that many in the Church are experiencing as its embrace widens further. And we are experiencing the anxiety that wider embrace creates.

Today’s text brings us right to the very chaos we are experiencing today in the ELCA, what shall our church community look like? How shall Christians behave? This is an experience that we share with the earliest followers of Christianity.

Some rules are abandoned when they are no longer relevant: Have you recently tried to remember the maximum number of people permitted to speak in tongues in a given setting?

Some are rejected because they no longer fit: Have you heard a woman preach the good news lately?

Indeed, there are some rules we abandon or reject.

But we do not abandon or reject the Good News.

We ask together in times of chaos, “What should be done then, Friends?” We remember, “Let all things be done for the building up.”

Today’s text brings these ancient messages to us in our present day. As we live into this anxious time in the ELCA, what rules will we create to live out our new understanding of God’s expansive welcome? What chaos are you experiencing today and what rules will you create? Will these rules be grounded in Paul’s message: let all things be done for the building up?

And may that peace, which passes all understanding, go with you this morning and beyond in your times of anxiety, and disorder, restoring you. And now renewed, you are freed to share the good news you have heard. Amen.