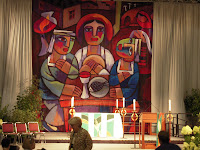 Halleluiah! What an amazing time to be a Lutheran!

In the coming weeks and months we will be talking with supporters, ELM Roster members, affiliated congregations, coalition partners and the Evangelical Lutheran Church in America. We will be gathering responses, reactions, questions and reflections to inform our work in the days and weeks to come. Working together with our partners in this movement, ELM remains committed to supporting the full inclusion of people of all sexual orientations and gender identities in the life of the church as we explore together what that means in light of the ELCA’s recent decisions.

We express our profound gratitude to Lutherans Concerned/North America and the Goodsoil coalition for their hard and successful work to organize within the church to enact policies that welcome and support people of all sexual orientations and gender identities in the Evangelical Lutheran Church in America. We joyfully celebrate together during this time of watershed change in the Lutheran church!

Extraordinary Lutheran Ministries is the result of a twenty year movement within the Lutheran church to affirm the calls of people of all sexual orientations and gender identities. For a long time, we have been saying yes in the face of church policies that said no to the gifts and talents of gay, lesbian, transgender and bisexual pastors. We express our deep appreciation to the members of the Extraordinary Lutheran Ministries Roster and the congregations that have opened their call process to our roster, and all those who have demonstrated for many years what it looks like to affirm the calls of lesbian, transgender, gay and bisexual people.

We remember and grieve the loss of those who resisted these policies as long as possible, but who left our denomination, or the Church, or did not live to see this day. We recognize that there are still pastors for whom the possibility of coming out is tempered by the reality that they may be serving in a congregation or synod that may not affirm their call based on sexual orientation or gender identity. We pray that someday all people may live and serve openly and authentically without fear of rejection from their church.
We will continue to keep you informed about further developments for ELM.

Well, what’s next for ELM? Many of you have been asking us in recent days, since the Evangelical Lutheran Church in America voted to change their rostering policies regarding clergy in same-sex relationships.

In the coming days and weeks, Extraordinary Lutheran Ministries will be talking about our next steps as we continue to support ministry opportunities people of all sexual orientations and gender identities called to ordained ministry in the Lutheran church. Check back in the next day or so for a response from the Covenant Circle of ELM.

We are interested in hearing from you! Share your thoughts by sending us an email at info@elm.org. 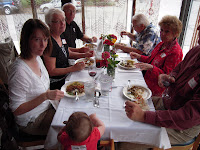 “Julie Boleyn exemplifies the academic and pastoral qualities and courage so characteristic of Joel Workin, and looks to be a strong future clergy leader in this church.” Greg Egertson, Joel R. Workin Memorial Scholarship chair.

Julie Boleyn is a third-year student at the Lutheran Theological Seminary at Chicago. She recently completed an internship at Faith Lutheran Church in Chicago. Julie lives in Chicago with her partner, Jeanie Reardon, and their daughter Madelyn.

Twenty years ago when Joel Workin came out as a gay, Lutheran seminarian, he and several others helped spark the current movement supporting openly gay, lesbian, bisexual and transgender (GLBT) persons in ordained ministry. Following Joel’s courageous and faithful act, his certification for ordination was vacated when Evangelical Lutheran Church in America (ELCA) bishops refused to place his name on the roster of approved candidates waiting for call. The Joel R. Workin Memorial Scholarship was established in 1995 by the generosity of Joel’s family, colleagues and close friends. Boleyn is the third recipient of the scholarship.

“Twenty years and ten Churchwide assemblies later, the same policy of mandatory celibacy for lesbian, gay, bisexual and transgender clergy that excluded Joel Workin and so many others still stands. Yet, there can be no doubt that God is calling the gifts and graces of people of all sexual orientations and gender identities into the church’s life and mission – people like Julie Boleyn, an ELM candidate for ordained ministry who has shown tremendous gifts of intelligence and compassion.” Rev. Erik Christensen, Extraordinary Lutheran Ministries co-chair.

Extraordinary Lutheran Ministries will publicly award the scholarship to Boleyn at an awards dinner in Minneapolis on August 20.

“I am honored and humbled to receive this award. Joel Raydon Workin claimed his sexuality openly, honestly, and without apology. His courage and conviction has made it possible for me to follow my own calling with integrity. I am deeply grateful for his witness.” Julie Boleyn, 2009 Joel R. Workin Memorial Scholar.

The Joel R. Workin Memorial Scholarship supports seminarians who have been admitted into the Extraordinary Lutheran Ministries candidacy process; and encourages them to persevere in their preparation for ordained ministry. The recipients must be enrolled as an openly gay, lesbian, bisexual, or transgender student, have demonstrated gifts for Word and Sacrament ministry, and seeks to fulfill their vocations as publicly identified sexual minority persons. The recipients demonstrate academic excellence, integrity and courage in response to the ELCA’s discriminatory policies, a passion for social justice, faithfulness to Jesus Christ and potential to become an effective leader in church and society. The early witness of Joel Workin and several other gay seminarians led to a larger movement within the Lutheran Church. Extraordinary Lutheran Ministries, a result of this witness, credentials and rosters openly gay, lesbian, bisexual, and transgender people for ministry; supports these pastors by working with congregations that will call them and providing mission grants to support their ministry; and provides a network of support to the congregations and pastors.

Next week, the Evangelical Lutheran Church in America will hold its biennial Churchwide Assembly. Among many other items, the Assembly will discuss the proposed Social Statement on Sexuality and accompanying Ministry Recommendations. Our partner organization, Lutherans Concerned/North America has been organizing for months with several other groups as the coalition Goodsoil. Learn more about their work–or volunteer–at goodsoil.org. While we strongly support the work of Goodsoil, ELM is not actively involved in the coalition. It is our calling to live out the fully inclusive future we all imagine for the church.

ELM Executive Director Amalia Vagts will be at the Assembly all week to attend sessions, meet with supporters, and bear witness to this part of the ELCA’s journey. Many members of the ELM Roster will also be there to participate in Goodsoil worship activities and as Goodsoil volunteers. ELM Roster member Rev. Megan Rohrer will be on street retreat throughout the Assembly, living on the streets and blogging about her experience. You can follow along at mystreetreatreat.blogspot.com.

We invite all Twin Cities area friends to attend the Goodsoil worship service on Wednesday, Aug 19 at Central Lutheran Church.

ELM will be sending updates via Twitter about Assembly actions and ELM-related news throughout Churchwide! Follow us @ELM2649. You can search all ELM/Churchwide related tweets by searching “#ELM #CWA09”. If you have never used Twitter, here’s a reason to check it out–if you are a person who sends and receives text messages on your phone, within minutes you can be set up on Twitter and receive our updates via text message.