Stop by and visit us in Chicago!
The Operations Coordinator, Rachael Johnson is in the office Tuesdays and Wednesdays!
Email her to arrange a visit at operations@elm.org

A Lutheran congregation in Newmarket has been suspended for employing a married gay man as a pastor.

In a letter and telephone call on Saturday, Rev. Michael Pryse, bishop of the Kitchener-based Eastern Synod of the Evangelical Lutheran Church in Canada, informed Holy Cross Lutheran Church it had been suspended by the Synod Council.

The suspension prevents the congregation from sending voting delegates to national and synod conventions. It also bars clergy and lay people from serving on church governing bodies.

In May, more 300 people attended the ordination of Lionel Ketola at Holy Cross. Ketola is openly gay and legally married to another man.

His ordination is not recognized by the national church. The denomination will ordain gay people, but they must remain celibate. The national church doesn’t perform marriages for homosexual couples.

Holy Cross employs Ketola as an associate pastor and “ambassador of reconciliation.” He advocates for more inclusive regulations in the church. He spoke at St. Mark’s Lutheran in Kitchener this month.

“I mourn the reality that our church is disciplining congregations which have the courage to minister in a relevant way,” he said in a brief telephone interview yesterday.

“I’m very proud of Holy Cross. One of the difficult things for me, one of the painful things, is to see a church paying the price for this.”

“You have to weigh that against the value of Pastor Lionel’s ministry,” she said.

The congregation is suspended from voting at conventions and serving on governing bodies and committees, but it hasn’t been expelled from the denomination, Hutchings noted.

Hutchings was encouraged Pryse’s letter indicated the Synod Council will work toward changing the policies that prevent everyone from “full participation” in church life. She said her congregation is deciding whether to appeal the suspension.

An Open Letter to the Members of Holy Cross Lutheran Church, Pastor Dawn Hutchins, Pastor Lionel Ketola and the Church from Extraordinary Lutheran Ministries
“And I, when I am lifted up from the earth, will draw all people to myself.” John 12:32. Grace and peace to you, our brothers and sisters in Christ. We write to express our solidarity with you at this time.

We are profoundly grateful for your witness and moved to remind you at this time of what you already know: that the authority by which Pastor Lionel was ordained came from you – the gathered people of God at Holy Cross Lutheran Church. We remind you that Pastor Lionel has been examined by and is credentialed through Extraordinary Lutheran Ministries, a community of mutual support and accountability. And we remind you that the ministry to which Pastor Lionel has been called is one of reconciliation. The pain of this day is a mark of the cross you have all been called to bear. God be praised for your ministry.

You have learned that Bishop Michael has chosen to suspend you. A suspension is the space between one place and another. In this sense, it is not Holy Cross that is suspended; rather it the Synod Council of the Eastern Synod of the Evangelical Lutheran Church in Canada which is suspended between the church as it is and the church as it should be. Holy Cross Lutheran Church has stepped out of suspension and into the ministry of reconciliation to which God has called you.
In the coming days you may feel more than ever the weight of the name you carry as a congregation. This Holy Cross you bear may feel particularly heavy today. But the good news of the gospel is that you do not have to bear this cross alone. The members of the community of Extraordinary Lutheran Ministries and many others are beside you, and we lift this cross with you as we walk along this road together. You have been suspended, but you have not been made invisible. The Holy Cross you carry will draw people from all walks of life and show others your ministry of reconciliation and your love of the gospel.

Bishop Michael and the members of the Synod Council indicate that they want their policies of exclusion to change. We celebrate the good news in this. The severity of their response reflects the reality of the current policy in the Evangelical Lutheran Church in Canada. This is a policy that the church still has to live with. We join with Bishop Michael and the Eastern Synod Council members in their “expressed desire to responsibly work toward changing policies that preclude the full participation of all God’s people in our ecclesial life.”Pastors Lionel and Dawn and Members of Holy Cross Lutheran, we hold you in our thoughts and prayers. We walk with you on this road to reconciliation. We offer the shared experiences of those who have gone before you in facing discipline from the church as a result of their decision to follow Jesus’ call to stand with those the world passes by. We honor and applaud your commitment to being the church now as we continue to grow more fully into the reign of God. 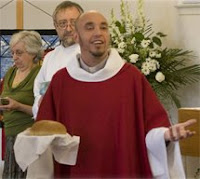