Rev. Brenner has been involved with hospice work for over 30 years. He served as interim pastor at St. Francis Lutheran Church and has also been very active in music ministry. 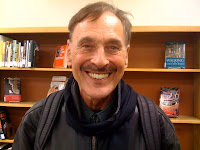 Rev. Robertson served nearly 25 years as an ELCA pastor. He is currently serving as a Spiritual Coordinator/Bereavement Counselor for AseraCare Hospice, Bloomington.

Rev. Erik Christensen clutches a 64-ounce Diet Coke while a parishioner fixes a rusty slop sink–it’s a double Big Gulp kind of day for the pastor of St. Luke’s Lutheran Church of Logan Square. The minister knows that what his century-old church with its neo-Gothic flying buttresses really needs is tuck-pointing. This is just one of many obstacles Christensen and the congregation have faced. Both have been told by Lutheran church administrators they shouldn’t exist: Christensen, 35, because he is an openly gay minister, and the congregation because membership had dwindled to about a dozen.

But over the last two years, Christensen has nearly tripled the congregation. And the Evangelical Lutheran Church in America, the country’s largest Lutheran denomination, announced last month it is considering allowing gays and lesbians in committed relationships to serve as clergy members. 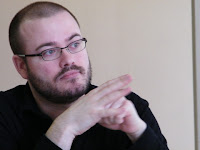 John Brooks, spokesman for the Chicago-based Lutheran church group, said that if gays are allowed to be clergy it will likely be at the discretion of each church. Christensen said he appreciates that the group is showing flexibility. “It’s about creating a policy to reflect what is already happening for years in a fairly unspoken way,” he said.

But his main focus is on continuing to grow St. Luke’s, where the threat of closing still looms.
Some of Christensen’s methods can seem non-traditional. While he tries to reach people from the pulpit, he also posts his sermons on Facebook and it’s not unusual to find him on the dance floor of a club. His congregation members say they appreciate his trying to blend tradition with liberal thinking.

Libby Ahearn, 24, said that’s why she and husband Brian Gilmore, 23, joined St. Luke’s more than a year ago after a long search. “We were getting desperate to find a church,” said Gilmore. “We went to five churches, even as far as away as Lincoln Park, and couldn’t find any one we liked. But then we found St. Luke’s and Erik.” The couple liked the small, friendly congregation and Christensen’s down-to-earth sermons. “He always seems to tailor his message to our needs,” and to the neighborhood, said Ahearn, who now serves as the Sunday school teacher, the first the church has had in many years.

St. Luke’s path has been anything but traditional for a long time. After swelling to 800 members in its heyday in the 1950s and ’60s, it declined as the neighborhood changed and families moved away. Before Christensen, the last full-time pastor left in 1991 and the church limped along with only 10 to 12 parishioners regularly attending services.

By June 2001, the church council recommended St. Luke’s close. But the remaining stalwarts were adamant that it stay open.
“We virtually had no kids, but there was a core group of us that were very stubborn and wanted to give it one last chance,” says Judi Keippel, 64.

They sold the parsonage in 2004 and used $390,000 from that sale as seed money to redevelop the church. They put on a new roof, installed a boiler and began searching for a full-time pastor.
After years of searching unsuccessfully to find a pastor through traditional methods, Keippel noticed a mailing advertising pastors from Extraordinary Lutheran Ministries, which helps ordain and place ministers regardless of sexual orientation.

“I wouldn’t be honest if I didn’t say a few old-time members don’t care for the idea” of hiring an openly gay pastor, Keippel said. “But most are accepting and like Erik’s enthusiasm, energy and ability to organize and his outreach to the community. His spiritual gifts are phenomenal, and he really seems able to relate to people.”

“Besides, we’ve always been known as the church that never really follows directions,” Keippel’s husband, Bill, said.
“Some refer to us as that feisty congregation,” he quipped. “And I love that.”

Christensen had been ordained by ELM after being kicked out of a mainstream seminary for being gay. He had worked for a couple of years helping homeless youths in non-profits in Washington and Atlanta before returning to a more spiritual life.
He was offered the St. Luke’s post in October 2006. Until that point, only eight ELM-ordained people had ever been called to serve parishes.

“[Parishioners] actually felt like there was a place for them in Logan Square and that they weren’t ready to give up,” Christensen said. “And I could relate.”

Since then, membership at St. Luke’s has grown to 30 or more regular members, a testimony to Christensen throwing open the church doors to the community, including non-Lutherans.
The church now houses a Boy Scout troop, Elijah’s food pantry, Narcotics Anonymous and a Weight Watchers group. There is also Teatro Luna, a Latino-women run theater company; a music program for grade-school children available through a partnership with DePaul University; a bilingual Fine Arts for Tots music program; the Chicago Community Chorus; and a yoga and tai chi studio.

Christensen said members originally thought the church would need to close some time this year. With revenue from these groups, Christensen now estimates that St. Luke’s has enough money to stay open for two years.
Phil West started attending services at St. Luke’s three weeks ago with his fiance, Liz Garvey. He said he is not concerned about the size of the congregation or that Christensen is gay.
“It’s the warmth that you feel,” said West, 33, who is “church shopping.”

“People are people. It doesn’t matter your sexual orientation. … Times are changing and people are becoming a little more open.”

So, hopes Christensen, is the Lutheran church.

“My dad told me that everybody is called to be something,” said Christensen, who grew up in Des Moines, the son of a choral conductor. “Lutherans believe that.”