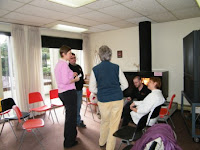 Friends of Extraordinary Lutheran Ministries will gather in San Francisco on February 14, 2009 at St. Mark’s Lutheran Church and you are invited! 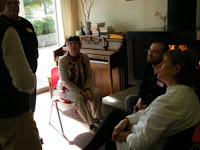 The daylong event is open to all and will focus on the ministry being done by members of the Extraordinary Lutheran Ministries Roster and ELM affiliated congregations and ministries. Events include worship, fellowship, conversation, and entertainment by the talented Bay Area queer duo Coyote Grace. 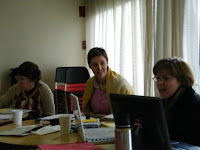 This free event is from 9:00 AM – 5:00 PM, and includes lunch. There will also be a special service opportunity from 5:30 – 7:00 PM at the Welcome Ministry for those who are interested. To register for the event, please email Rachael at operations@elm.org.

Pastor Steve Keiser became the 18th Lutheran pastor to be extraordinarily ordained since 1990, and the 10th since 2006. This is the first extraordinary ordination in the eastern time zone. The huge Lutheran Church of the Holy Communion sanctuary was filled–estimates place the crowd at about 500 with nearly 40 vested clergy participating. It was a truly amazing day. Pastor Steve has been serving at Holy Communion for 8 years as a pastoral associate and has been called as pastor to the congregation. He will serve with Pastor Kari Hurt.

The Rev. Jay Weisner placed a stole which has been worn by every ELM ordained since Anita Hill on Steve’s shoulders during the service and the oldest member of the congregation read the final words proclaiming Steve a called and ordained pastor. It was magnificent!

First United Lutheran Church in San Francisco, the first Lutheran church to ordain an openly LGBT pastor in the 1990s, recently welcomed a new queer member of the ministry. Jay Wilson, now one of the few openly transgender pastors in San Francisco, was ordained by Extraordinary Lutheran Ministries and installed as a pastor at First United last month.

First United became a refuge for LGBT pastors after the Evangelical Lutheran Church of America decided in 1989 that all openly gay and lesbian clergy must live celibate lives or be expelled from the ministry. The First United church was itself expelled from the ELCA in 1995 for ordaining openly gay pastor Jay Johnson shortly after the denomination’s ruling on celibacy.

Wilson’s December 6 installation celebrated the unique perspective he would bring to his pastoral work. Wilson will be working with the homeless and the disabled as well as offering education around gender identity in his pastoral role at First United.

“Jay helped 36 people get into housing since April,” said pastor Megan Rohrer, who officiated the ordination and installation. Wilson began his pastoral work with the homeless several months before his ordination.

“It felt hopeful to be ordained, and a bit overwhelming, too,” Wilson said in an e-mail interview with the Bay Area Reporter after his ordination and installation.

Wilson, who has Asperger syndrome, prefers to offer such counseling in one-on-one sessions. The ceremony included a number of accommodations for his disability. Red ribbons, strung from the balcony at the back of the sanctuary to the pulpit, were used to approximate the traditional laying on of hands near the close of the ceremony. Attendees held the length of the ribbons, and Wilson held the end, a moment of connection without the physical touching that would have caused Wilson discomfort.

As part of his official ordination, Rohrer draped Wilson with a stole sewn by his mother, Deb Wilson, who attended the ceremony with Wilson’s father, Ron Wilson. The stole featured a repeating rainbow motif, with a cross stitched onto the side of the fabric that will rest on Wilson’s chest.

ELM, the Lutheran organization that ordained Wilson, was created in 2007, formed from two LGBT-friendly grassroots Lutheran groups that emerged in response to the celibacy rule. They sought to credential all qualified pastoral candidates regardless of sexual orientation or gender identity.

Wilson found that he needed that credentialing process near the end of his pastoral training. After four years of training as an openly transgender and queer pastoral candidate, Wilson was disqualified from pastoral service.

“There was an article published about me in a conservative Lutheran newsletter which faulted the seminary and denomination for allowing me to serve,” Wilson explained.

The candidacy group that had supported Wilson’s pastoral candidacy withdrew its support after the article, Wilson said. His congregation, however, didn’t waver in their embrace.

“The Sacramento congregation where I was serving as intern pastor was prepared for this, and mobilized to make sure that the congregation and I were continuing to be supported,” Wilson said. Wilson continued his work there as an ELM candidate.

As a pastor, Wilson will focus on helping the homeless population of Polk Gulch, many of whom also have disabilities, get the official papers that enable them to access benefits.

“In today’s political climate, our guests are treated as non-persons without ID, because they cannot access benefits, get housing (even in shelters), get jobs, or legally be out on the streets.” Wilson explained. “Combine those realities with the lack of adequate shelter and low-income housing, and basically homelessness is being criminalized without the resources for people to get out.”